What happens when you combine passion and persistence for many decades? You usually end up building something significant. In the case of Paul and Charlie Farren that significant thing is a collection of vintage bicycles. Not just any collection, but certainly the largest and rarest collection in Australia and probably one of the best in the world.

The Farren Collection covers every conceivable size, shape and style of bicycle and tricycle, spanning about 150 years. In 1990 Paul bought a large old warehouse in Richmond, in Melbourne’s inner eastern suburbs. It does not just house the collection, but a full workshop complete with an equally rare collection of vintage workshop tools that have enabled Paul and his friends to restore ancient bikes back to rideable condition. Although ‘restore’ is not the word Paul would use, rather ‘renovate’ which means keeping the bikes as original as possible, even if that might mean some chipped paint and other wear and tear.

Recently ‘Bicycling Through Time’ a beautifully photographed and presented colour coffee table hardcover book was published to document and celebrate the collection.

Paul and Charlie exhibited a portion of their collection at the 2013 Ausbike show in the Royal Exhibition Building in Carlton, where they happily signed copies of their newly published book and  answered questions about their amazing collection of machines.

Their participation was even more of a celebration, because Paul, who has been battling a serious medical diagnosis, was fit and chirpy throughout the exhibition.

Paul, who was an orthodontist by profession before retiring some years ago, is rarely lost for words when it comes to speaking about his collection. So we simply asked one or two questions and enjoyed listening to the stories that they prompted, an edited version of which you can read below…

Bicycling Trade: When did you start collecting bicycles?

Paul Farren: It’s hard to say because the ideas are often implanted in your youth. At age 12 I bought a 1930’s tandem, a Sun tandem which I restored. I built the wheels and my sisters and I and even my mother and father rode it.

Then a neighbour gave me an 1890’s tandem frame, which I never ever got around to restoring. When I went to university my father threw it away. For somebody that never threw anything away, he threw that beautiful tandem frame away! I sometimes jokingly say I’ve been looking for it ever since.

Then we came to Australia (emigrating from the UK) with very mild winters as a European. I can say it was ‘heaven on a stick’ living in Victoria. We started riding and quite quickly realised that this was it. We’d been world travellers. Riding a bicycle especially for travel and for commuting and for everything else it is just such a joy that I can honestly say in my mid 30’s I was convinced that I would ride a bicycle until I died.

This was going to be a lifetime love affair and on that basis I thought, ‘I want to delve a bit deeper!’ I went seriously out to find an old bicycle. A 1901 Lea Francis is what I set out to find. I’ve never found that Lea Francis, but I’ve found an awful lot of other bicycles along the way and I’ve been stunned to discover that these machines are not sitting in museums.

You can still at relatively small money for instance turn up bone shakers. (early wooden wheeled bicycles) There’s several dozen bone shakers in Australia from the 1860’s and they’re not in museums. Museums have taken very little interest in these things. Only one museum in Australia has ever taken an interest in bicycles and that’s the Power House Museum in Sydney. They’ve got a very good collection, but it is hidden in the basement. There’s not much in Victoria or any of the others.

BT: How many bicycles are now in your collection and what will you do with it?

PF: There’s 213 now. Before we did the inventory, which was 18 months ago, I thought there was 150. But there was actually 210 and I’ve bought three bicycles since then.

I’d love it to be a public collection. I’d have to consult Charlie totally on it, but I think we’d be content if someone was prepared to house them and look after them and to make sure this was in public ownership. Then we’d give the collection away. But if nobody comes up with the answer to that problem we’ll ship them off to New York or London and they’ll be sold on the world market.

They’d be much more valuable in Europe or America than they would be here. The world prices for these things are really high.

‘Bicycling Through Time’ is published by Images Publishing 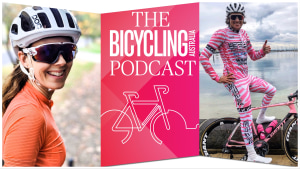