Two key staff from Surly’s global head office in Minnesota, USA recently visited Australia and New Zealand. Bicycling Trade caught up with them for lunch and a chat, just a few hours after they’d landed in Australia. Despite about 30 hours of total travel time, they’d already visited one store and their mood certainly did not match the name of their bicycles.
They were being hosted by Surly’s Australian distributor Stuart Voysey of SCV Imports who had a tight itinerary of bike shop visits planned for them, along with a little riding.
Surly is one of a stable of bicycle brands that are owned by American Steve Flagg and his wife, who also founded and own America’s largest IBD distribution company, Quality Bicycle Parts (QBP).

Bicycling Trade: What brings you to Australia and New Zealand?

John Fleck: Our main intention is to visit distribution partners in Australia and New Zealand. This is a momentous thing for Surly because we’ve never launched a visit to Australia or New Zealand on behalf of our brand.
It’s what we call a Surly Tour. We do this sort of thing in Europe with our German and Netherlands distributors. We also do it in Japan, and obviously in the USA and Canada.
The idea is not just formal sales training and distributor visits but to see top shops, hopefully pedal a bike or two, take in some of the local cycle culture and just get a better feel for the market, so we can improve what we’re doing to support our distributors.

BT: Is it just coincidence that you’re coming from your freezing winter to our summer?

JF: I want to throw in a caveat. We did try to plan this trip for October, which would have seemed less blatant in escaping our winter! (laughs). When we left it was minus 15 degrees in Minnesota and it’s what, 30 degrees here today. It’s our first time in the southern hemisphere.

BT: What do your jobs specifically entail at Surly?

BT: When did Surly start?

JF: We have been around since 1998.
AZ: It started with one or two parts to allow us to ride bikes the way we wanted to ride them. Then we introduced one bike, then another bike, then another and we got to where we are now.
JF: Our first product was a single speed chain tensioner and that pre-dated our first frame by a full year. The idea was you could take that 1980’s steel MTB with vertical dropouts and turn it into a single speed. ‘Shop rats’ really loved that idea. That’s the wrenches, the mechanics - the people behind the scenes.

BT: Which was your fist bike?

BT: I see that you have five categories of bike: OmniTerra, Pavement, Touring, Haulin’ and Trail. Which is your biggest seller now?

JF: Definitely our best seller is touring. So our Long Haul Trucker, Cross-Check, Straggler… those ‘do everything’ bikes. Long Haul Trucker has been our best seller for over five years now.
Now OmniTerra is what’s stealing the show these days because of the fat bike boom in the States as well as Europe. Last Eurobike was unbelievable in terms of the number of fat bikes you saw at the show. We have a lot more competition now than we used to.

BT: You do a big range of fat bikes. Are they more of a branding statement? How many of those things do you actually sell?

AZ: There definitely gaining in popularity, both domestically and internationally. Fat bikes were kind of a slow burn for us. They took a while to catch on. We’ve been doing the Pugsley for over eight years.
The guys who designed that, wanted a bike for endurance winter riding, so that they could explore anywhere they wanted to go. The wide platform of those tyres and wheels allowed them to ride over snow and mud much more easily. So it’s not really a brand statement as much as it is about the utility and versatility of that bike.
We started with the Pugsley which is a four inch platform. We then thought, ‘there must be a way to go even bigger, to get even more flow,’ then the Moonlander came about.

JF: For instance for the Long Haul Trucker, it captures the sense of wanderlust. People look at it and it inspires the thing they want to one day do. It’s an educated guess, but probably fewer than 20% of Long Haul Trucker customers actually take it on a week or longer tour.
Most of them are looking for one bike that they can do absolutely everything with, the principal part of that being for commuting, or riding around town buying groceries whatever.

BT: What is ‘bike packing’ and what’s the difference between this and traditional touring?

JF: Bike packing in a nutshell is backpacking by bike. It’s the same ultra-light philosophy. The main physical difference being how you load the bicycle. You load in and around the bike instead of adding auxiliary racks and loading off the bike.
Frame bags, handlebar bags, seat bags, but nothing hanging off the bike to get caught on obstacles on the trail, and you keep your centre of gravity in line with the frame of the bike, and maximise your handling characteristics for off road use.

JF: Not just steel, we’re 100% 4130 chromoly frames. It boils down to brand values. The big thing is the ride of steel. It absorbs shocks. It’s comfortable over the long haul. It handles loads very well, whether that’s hanging off the rack or strapped to the frame. It’s repairable, so if you do happen to break something, you can usually get it repaired so you can get out of a jam and maybe finish your trip.
It’s recyclable, much more so than a lot of advanced materials these days. And it tends to have a very long service life. It’s rare to have catastrophic failure on a steel frame that isn’t impact or rust related.
AZ: Most of our frames are now ED (electro dip) coated. It allows the frame to last a lot longer. We still recommend that you use a frame protector like a Boshields T9 or something.

BT: Where are your frames made?

AZ: They are manufactured in Taiwan.
JF: We’ve been using the same frame manufacturer since the beginning of our brand. It’s a family owned operation.
I think the key thing is that we actually create the specifications of our tubing profiles, diameters, wall thicknesses, all of the butting profiles. All of that’s custom for each model. And then within each model, every size has a specific tubeset that’s cut and mitred by butting profile to maximise the benefits of that tubeset for that frame size.
That’s because we recognise that your top tube length for a 42cm frame vs a 58cm are completely different. If you take one tube and cut it down, you’re sacrificing something somewhere.

JF: This taps into some more of those more lofty brand value conversations. When Surly started we were very much a single speed brand. No BS. Strip all the superfluous stuff off. Just shut up and have fun riding. Get on it and pedal.
They’re utilitarian. They’re DIY. They want to transfer parts over. They’re not necessarily cheapskates but they’re individualistic and they’re very pragmatic. They want something that works for a long time.
Our colour schemes are not flashy. We don’t change them every year. Our customers don’t give too much of a rip about the cosmetics of the bike. They care about the function of the bike. A lot of our customers will even take to peeling the logo decals off.
But in some markets like Japan, we see the most incredibly painted, customised designs.

BT: What’s the gender split of your customers?

JF: I’m going to put it at around 75% men, 25% women. We have more female Surly riders than I think people would believe. We’ve always accommodated the smaller riders.

BT: What’s the next bike category coming? What do you see?

JF: We’re looking at the opportunity to tweak some things with some of our existing models. As far as the next big thing, there are a couple of exiting things for next year that I can’t talk about. They’ll be big, if that’s enough of a hint.
We’re certainly going to look at that haulin’ category. Our trailer platforms are very much DIY at the moment so we’re looking at some more accessories that will complement those.

BT: What about the whole ‘Gravel Grinder / Gravel Bike’ thing? Do you see that as a new category?

AZ: It’s definitely a category. But it’s one that so many of the bikes in our line can easily be adapted to. It’s all about riding what you want, where you want.
JF: We have a chainstay sticker ‘FFF’ on all of our bikes. It means ‘fatties fit fine’ and that’s been since day one. We wanted to optimise tyre clearance because we recognised there’s something to be said for expanding one’s mind by getting on a little more comfortable, practical rubber size.
Why would you want a bike that only fits 23c tyres? If you’re racing and that’s your thing, fine, but what else are you going to do with that bike?
I think it’s good that the industry has begun to look at the possibilities. If they just open up those chainstays and the bottom bracket clearance a bit and encourage people to have more fun in a wider variety of conditions.
We’re a quirky line of bikes and we’re best represented by shop people who also may be a little quirky themselves, but can explain our bikes to customers.
You look at all these weird little products we build, and without some interpretation and explanation the consumer, most of the time, is maybe not going to get it.
So we rely on shops who actual ‘get’ our brand. They ride it. They believe in it.
We’ve experimented in the past with larger accounts, but we tend to get lost in the wash.
We’re a complimentary brand that’s non-threatening. If somebody caries Giant or Trek or Specialized, one of the big brands, they can usually sneak Surly in as a side brand that complements that stuff really well.
Shops realise that’s a recipe for success. You can’t give all customers just the same recycled options over and over again. You’re always going to find those customers who want something different.

BT: So far this trip you’ve only visited one shop…

JF: Cheeky Transport has been one of our mainstay shops in Australia. I started with Surly in 2008 and they were already one of those quirky shops I was explaining earlier.
One mantra we have is that we build whatever we want to ride. We tend to build things before the rest of the industry understands them.
As a brand we’re also excited to expand people’s options of what they can achieve on a bicycle. The Pugsley is a good example. Our trailers… the design criteria for that was something that could haul two full kegs of beer.
AZ Priorities!
JF: We help solve bike utility problems that people didn’t even know they had. 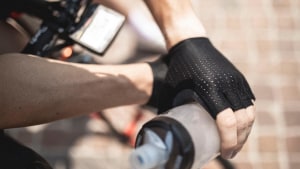