A brand new bicycle shop has opened in a brand new building in the Melbourne beachside suburb of St Kilda.

Just Pedal has been founded by Josh Hall and Steve Taylor.

“We met about two years ago and decided that we’d finally found the person that we wanted to go into business with. Our idea is to get new riders. We specialise in getting people riding to work, getting families out riding on the weekends.

“It sounds cliché’d but going into a lot of bike shops is intimidating and we wanted to change that. That’s why we’ve got the chairs set up at the front with a bit of Lego for the kids to chill out whilst mum and dad are having a look at the bikes.

“That’s why we’re stocking really nice commuters and family friendly mountain bikes. We can sell someone their starter bike and build them up through the years to get them onto whatever bike they want to progress to.

“We also run ‘bike school’ as well, generally on Saturdays. We’ve only been open four weeks but it’s growing rapidly.

“You’d be surprised how many people can’t ride a bike! Steve also owns a group called Cycling for the Terrified, which has over 600 members.

For example there’s a lady in an office just down from here on St Kilda Road. She’s already got a bike. She’s had it four years. But she just won’t ride it because she’s terrified of the traffic. We’ve got her coming in next Wednesday to take her for a ride and basically just calm her nerves.”

With all of this skills training in mind, Just Pedal has deliberately set up directly across from Albert Park, which is about three kilometres long and has an extensive network of paths and relatively quiet roads to ride on.

“This location couldn’t be any more perfect for us,” Josh enthused. “We’ve got the main commuter route of St Kilda road right here, and having the park opposite is perfect.

“I’m a mechanic, Steve gets in here when he’s not running courses and we’ve got another young lad called Benson Crick who’s working Thursday evenings, Saturdays and Sundays.”

Josh said that despite opening from scratch with other shops not too far away, business has been brisk from the start.

“We’re doing well with bike sales, but there’s a hell of a lot of offices around here and we’re getting repair after repair.

“I was in broadcasting back in London for a company that designed all the equipment for radio stations. But it wasn’t what I wanted to do so I moved here with my girlfriend four years ago,” Josh said.

Returning to his theme of being a non-intimidating shop for beginners, Josh continued, “ I had a lady come in last night who’s mid 50’s, wants to ride a bike but she feels way too intimidated to go into a shop because a lot of the time if you don’t want to spend $5,000 they don’t want to know. And for Steve and I, even though we both own really nice road bikes, we don’t have them in the shop.” 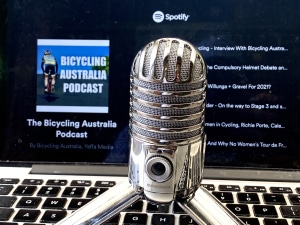