In Australia there are all sorts of generous tax deductions available for leasing and operating a motor vehicle, so why not bicycles?

Until now there has not been any tax advantaged option for Australia’s bicycle consumers, retailers and wholesalers to benefit from.

E-stralian is a new Melbourne based start-up company that plans to change this. Unfortunately this will only be possible for ebikes to start with, thanks to a key piece of wording in our tax legislation, but as we will discuss further at the end of this article, it will create in important precedent to push for non-electric bikes to be included in the future.

At the core of the tax advantaged system is the ‘novated lease’. This is a three-way agreement between the employer, employee and a lease management company, in this case, E-stralian.

This can save hundreds of dollars for consumers because they’re paying in pre-tax dollars which reduces their taxable income, while the bicycle store gets a sale and an ongoing service contract for the life of the lease.

Bicycling Trade recently spoke to Thijs van der Heijden, who along with Kent Kavanagh is co-founder of E-stralian.

As his name suggests, Thijs (pronounced ‘Tyse’) grew up in the Netherlands. He moved to Australia five years ago.

Thijs said, “E-stralian is the result of three key events and observations I made since I arrived to Australia. First, coming here with the experience of every-day bike riding in the Netherlands, I immediately saw the potential of the wide streets and the great weather for riding, but not the riders. This triggered my interest in the bicycle movement here. I wasn’t really thinking about it that much in the Netherlands, because cycling was so commonplace.”

“Second, I had seen the potential of ebikes in Europe and with the adoption of the European standard in Australia around 2013 I saw the potential for European brands to enter the market, which will be a good thing for the market as a whole.”

“Third, I learned about novated leasing for cars, and thought, ‘Can we combine these three things into something that might help get more people riding in Australia?’”

Thijs then approached Australian Taxation Office (ATO) to get a specific ruling that would give him the basis upon which to found his new business.

Tax rulings are binding advice given by the ATO that sets out how tax law applies in relation to a specific scheme or circumstance.

Most people would be daunted to tackle the labyrinthine bureaucracy of our tax office, but Thijs, who is a financial economist at the University of Melbourne with a PhD in economics, decided to try and succeeded.

“The tax ruling took us about a year or so to get, going back and forth with the ATO,” he recalled. “The tax ruling is only for ebikes. The tax office, for fringe benefits tax (FBT) purposes, classifies an ebike as a motorcycle and there is an existing clause in the FBT legislation about making motorcycles available to employees.”

“There is no existing clause that could apply to bicycles without a motor. That would require new legislation.”

Just to clarify: this ruling does not interfere with road rules, so all European standard compliant ebikes can be ridden as bicycles, with no requirement for licence plates, registration and so on, regardless of whether they are purchased normally or through a novated lease.

It’s still very early days for E-stralian. Besides Thijs and Kent, there is Ellen te Riele, also originally from the Netherlands, who takes care of operations and admin.

“We’ve started with a limited number of brands and models so that we can more easily manage the concept while we get it up and running,” said Thijs. “But we’ve had quite a bit of interest from other brands already.”

“Our business model is motivated by the Dutch word “ontzorgen”, which can roughly be translated as ‘all sorted!’. The tax ruling that we have obtained puts the onus of service and maintenance upon the employer. In order to make that easy for them, we’re taking on that risk, therefore we have to make a good assessment on the reliability and service costs for certain bikes. We’ve done that for the ones that we have on board now.”

“We expect to take on more brands early next year and also to expand the network of dealers and suppliers.”

“We’ve got one pilot project running now and we’re at different levels of progression in talks with about 10 other organisations, where we’re past the initial contact.

“We’re talking to a wide range of organisations: government departments, large corporates, but also some smaller local organisations and not-for-profits.”

At this early trial stage, E-stralian has not yet started dealing with bicycle shops, but in order to reach the large scale they’re aiming for, they’ll need retailers to be involved in future.

“So far we’ve got a direct distribution model, where we have mobile bike mechanics delivering the bikes and doing the servicing for us,” Thijs explained.

“We’re talking to some Melbourne bike shops, because that’s where we’re based, to try to work out how they can get involved. That will be an ongoing part of the business development.”

“The dealer will get the bike sale. We’ll purchase it from them, then they’ll have a service and maintenance contract for whatever the term of the lease is, which could be anywhere from 12 months to five years.”

“At least initially, it’s going to be us pushing people to the shop to look at the bikes, try them out and choose one. So we’ll be bringing additional clients who would not otherwise be looking at an ebike.”

“This system requires a three-party agreement. The employer has to be involved. Because we’re going through the employers, we have a different channel of reaching people to the existing bike shop channels.”

All of this sounds very promising, but there are still some ATO obstacles to overcome as Thijs detailed, “The pre-tax deductions mean that you have to comply with usage according to the tax ruling.”

“If you use the bike purely for commuting and other business use, then the novated lease will fringe benefits tax exempt, so you can pay the full lease out of your pre-tax salary.”

“But if you have any other private use, that is where you potentially enter into a grey area, which is one of the things we’re trying to clarify with the ATO, to make a less ambiguous statement.”

Meanwhile, E-stralian is not waiting for the ATO to get their act together, but pushing ahead with their business.

“We’re working towards selling around 3,000 bikes each year in five years’ time.”

When you consider that the bikes involved are currently around $4,000 average retail price, 3,000 bikes would have an annual retail sales value of $12 million. That’s before you take into account flow-on maintenance work, P&A sales and so on.

Given that much of this would be new business from new customers, if E-stralian can hit its targets it would provide a significant boost to Australia’s bike industry.

The Next Logical Step

Hopefully by pushing the tax office door just a little ajar and wedging their foot into it, E-stralian might help accelerate changes that cycling advocates around Australia have long been calling for.

There is no valid reason why novated leasing schemes should not also be available for regular bicycles as well. The fact that they are currently not included is a simple case of discrimination against a valid form of transport, and no different from past legislative prejudices such as for example when Australian laws prevented women or aboriginals from voting.

To fix this will require a very minor change to federal legislation. The definition of a vehicle simply needs to be widened to include bicycles.

Given all the benefits that would flow from this, you would think it would be a ‘no brainer’, but despite years of strategic lobbying by the Cycling Promotion Fund (CPF) working with the Heart Foundation and others, we’ve yet to see this change made.

Such a change would give a major sales boost for the bike industry as the highly successful Cycle to Work scheme in the UK has proven.

Britain’s scheme is largely run by a private company, Cyclescheme, who publish detailed reports. So far 2,100 bicycle retailers are involved. They’ve sold over 635,000 bicycles through the scheme.

Research by the Cycle to Work Alliance published in March this year found that 62% of UK bicycle retailers thought that the scheme was important to their business success.

Meanwhile, back in Australia, the CPF’s Canberra based lobbyist Stephen Hodge noted that in recent years the global CEO of Cyclesheme’s parent company had visited Australia along with other key personnel from the UK, to look into the possibility of launching a similar scheme here. They have already expanded into other countries including Ireland. 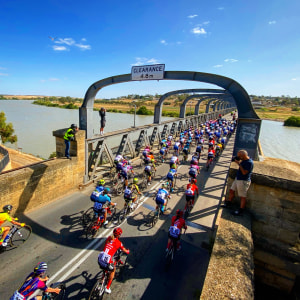